The name indigo comes from the Spanish word ‘indico’, which means Indian.

The steel blue indigo has been known since ancient Egyptian times. The indigo plant was already being used for making paint in the 14th century. It has been imported on a large scale from India to Europe since 1516.

The dye was made from the finely crushed flowers of the indigo shrub ‘indigofera tinctoria’, which grows mainly in the hot regions of India. The leaves, which around 1635 also came from Guatemala, were fermented in water containing lye. After 24 hours, the violet-blue foam appeared at the surface of the water. After various forms of treatment, such as washing and cooking, the part that floated on top was put in cloths, where it could slowly dry. 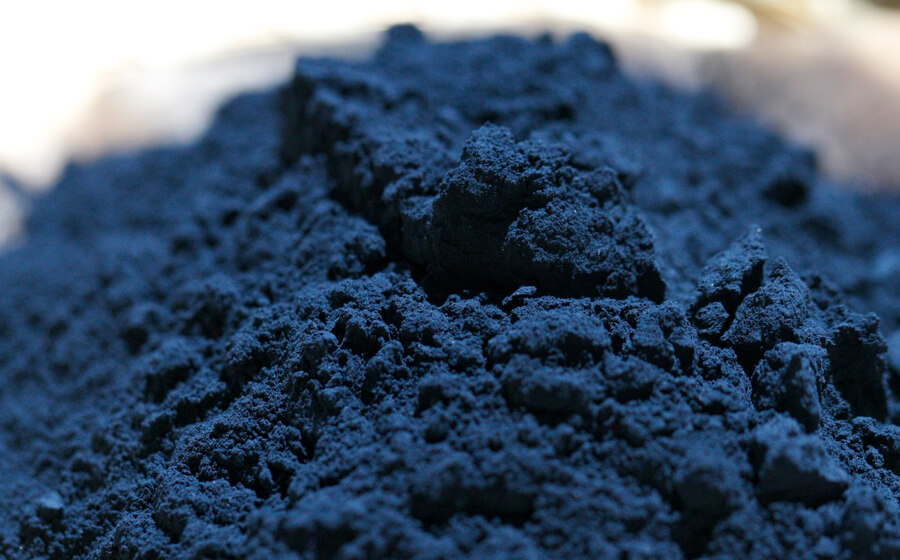 In 1878, the German Adolf Ritter von Bayer (1835-1917) found another method of preparing the indigo pigment synthetically. In 1890, K. Heumann succeeded in finding a means of manufacturing indigotine, which is the basic element for the indigo pigment, by subjecting naphthalene to a series of long treatments. This improved synthetic indigo was taken into production in 1897.

Nowadays, we still use indigo, but only to colouring jeans, that fade after washing.

Indigo, with its high colour strength, was not lightfast or acid-resistant. It was mainly used for water and tempera paint.

These days, we use the popular colour indigo for making water paints composed from a mixture of synthetic pigments, such as dark madder or carmine with carbon black and phthalo blue.

In order to imitate the colour as an oil paint, we mix a bluish magenta red with ivory black and phthalo blue. The more black we add to the two mixtures, the more neutral our tint becomes. This imitation colour can be lightfast and is still popular.