Johannes (Jan) Sluijters (often spelled Sluyters in English) was a Dutch artist, illustrator, master of the poster format, and an eye-catching proponent of expressionism.

Sluijters’s father, an illustrator and wood-engraver, sought to develop his son’s artistic talent from an early age. When he was fourteen, the artist moved to Amsterdam with his parents and sister, and it was here that he was to spend the majority of his life.

Jan Sluijters was a pioneer of the Dutch avant-garde in general. His work was initially rejected by conservative critics, but he went on to achieve great acclaim among the general public. In 1910, together with Jan Toorop and other like-minded artists, he founded the Modern Art Circle, a group that promoted avant-garde tendencies and resisted the traditional academic canons in painting. Sluijters was also a member of the Artists’ Association of The Hague and Amsterdam and the Sint Lucas (St. Lucas) Artists’ Society. Once he had achieved recognition in the second half of his career, the artist’s work featured in a large number of exhibitions throughout Europe and he was on the judging panel for a wide range of art competitions.

Jan, Rob & Liesje Sluijters, the children of the artist by Jan Sluijters

Jan Sluijters is known for his colourful paintings, painted in a bold, vigorous manner and using a free technique. His most popular works are his portraits of women and children, and his landscapes. As an artist who was not tied to one particular approach, he changed his creative style several times over the course of his career, trying out new methods and ways of portraying his subjects. His works were always emotionally saturated, while also showcasing his strong use of colour.

In the landscapes that Sluijters created, most of which depict the areas surrounding Amsterdam, one can trace his experimentation with colour and light in painting. The ancient streets and suburban landscapes are painted with the help of vivid spots and stains of pure colour, which, as they merge together, form a cohesive sense of harmony and rhythm. These canvases are marked by such powerful colour saturation and such an abundance of light that it is as though the landscapes are lit from within.

The artist painted many views several times over, applying different techniques and effects each time. He painted sunrises and sunsets with particular frequency, for they never failed to capture the artist’s imagination thanks to their wealth of different hues and the subtle nuances contained in manifestations of the natural world. 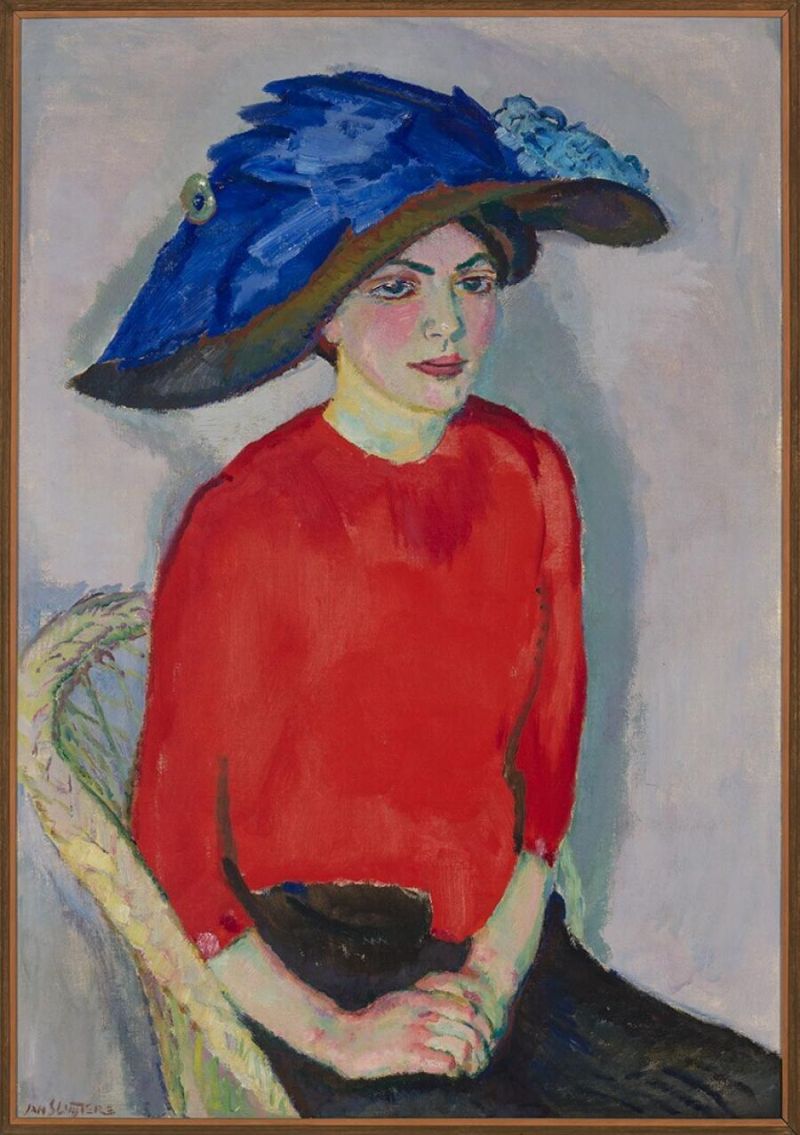 Lady in red by Jan Sluijters

His oeuvre also included a great many portraits and genre paintings. His favourite models were the other members of his family, whom he painted at home, going about their daily business. Sluijters received a large number of commissions for portraits. Although he depicted his subjects in a true-to-life, ‘warts and all’ fashion in these works, sometimes brutally so, his portraits were extremely popular with the general public.

The artist produced a host of artistic depictions of his contemporaries – from artists and musicians to tradesmen and politicians. The distinctive features of these paintings are the author’s sincerity and readiness to express emotion, and his individual approach to each subject.

In the latter part of his career, Sluijters gradually moved away from bright, attention-grabbing tones. He began to use a soft, harmonious colour palette and his works took on a more tranquil tone of voice, while losing none of their expressiveness and originality.

The artist’s paintings are housed at the Van Gogh Museum in Amsterdam and at museums in other cities in the Netherlands.