Vicente Romero Redondo is a Spanish figurative painter and educator, best known for his pastel depictions of graceful girls at solitary moments in romantic surroundings, adorned in crafty clothing. Having resided on the Costa Brava for years, his oeuvre has been praised for conveying rare beauty and serenity, while taking after the vivid luminosity distinctively seen in the art of native mediterranean masters. Romero Redondo’s oeuvre has been exhibited with honors across borders in Europe and beyond.

When did you first start painting? Were you born with a paint palette in hand, or did your interest in art develop over time?

It can not be said that I was born with a palette in my hand, but it can be said that since I was a child I had the support of my father in my love of drawing; he was very enthusiastic about painting and regularly visited the Prado Museum in Madrid, where he often took me. Later, around the age of 14, I began to paint in oils. I remember making copies of paintings of Goya, Caravaggio and Veronese. Around the age of 16 I began to paint my own subjects and a little later I took a course in etching. 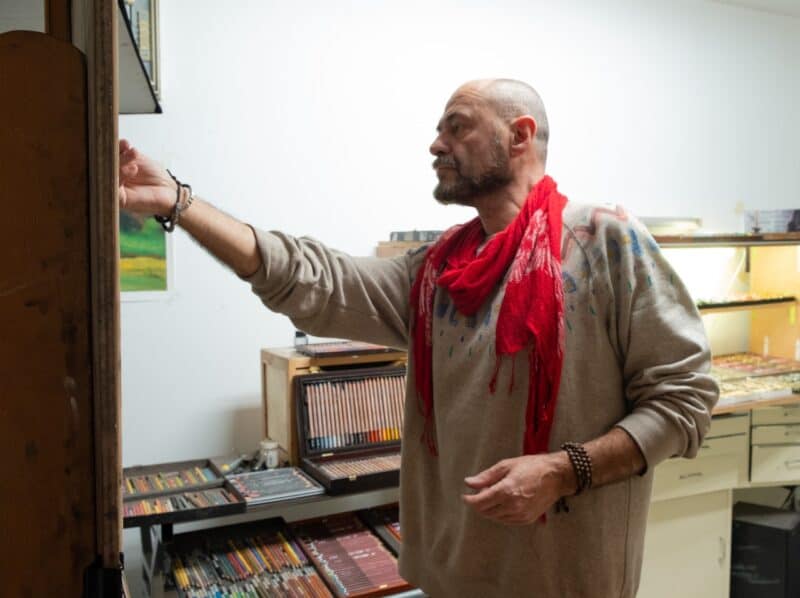 Was there a moment when you decided to follow your path as an artist?

After a year of hesitation, at 18 I decided to study Fine Arts. At that time it was necessary to take a very selective and difficult entrance exam to be able to study at the San Fernando School of Fine Arts in Madrid. I prepared myself for a year at a private academy and got the entrance exam in the second round. Once there I decided to study sculpture instead of painting. I realised that the knowledge of colour is relatively simple and rather intuitive. However, drawing is a real subject of study and sculpture is ultimately nothing more than drawing in three dimensions. Since later I ended up devoting myself only to painting, for a while I had doubts about whether it had been a good choice. Today I think it was, because in my personal view the accuracy that drawing brings is the main basis for the consistency of a painting. 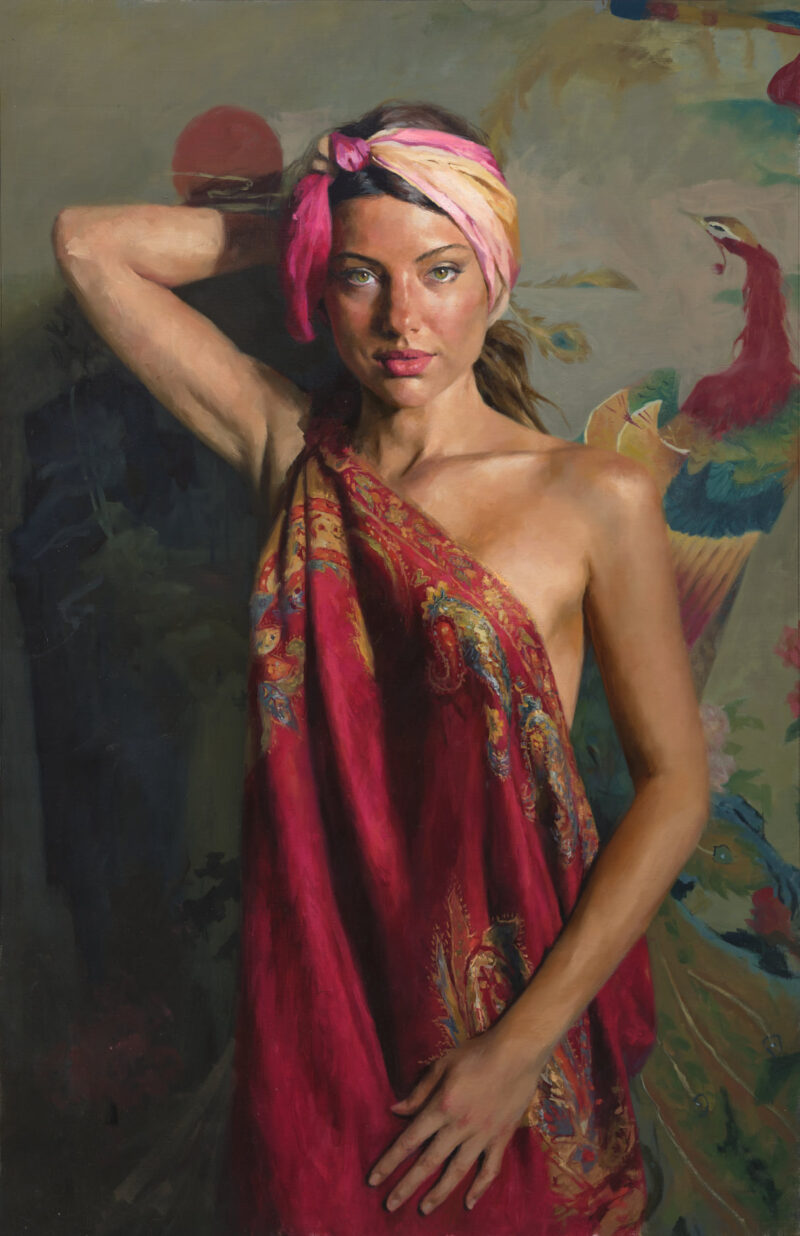 How can you describe your own style and technique?

I consider myself a clearly classical painter, if one wants to use a term with somewhat pejorative connotations, an academic painter. My sources of inspiration have been mainly Renaissance and especially Baroque artists, such as Titian, Rubens, Velázquez and Rembrandt. Apart from that, I recognise a slight influence of impressionism in the sense of a certain liberation of colour from the subordination to chiaroscuro. However, I cannot say that I admire any of them too much, I do admire much more some contemporaries such as Degas or Manet, as well as some later ones such as Sargent or Sorolla. 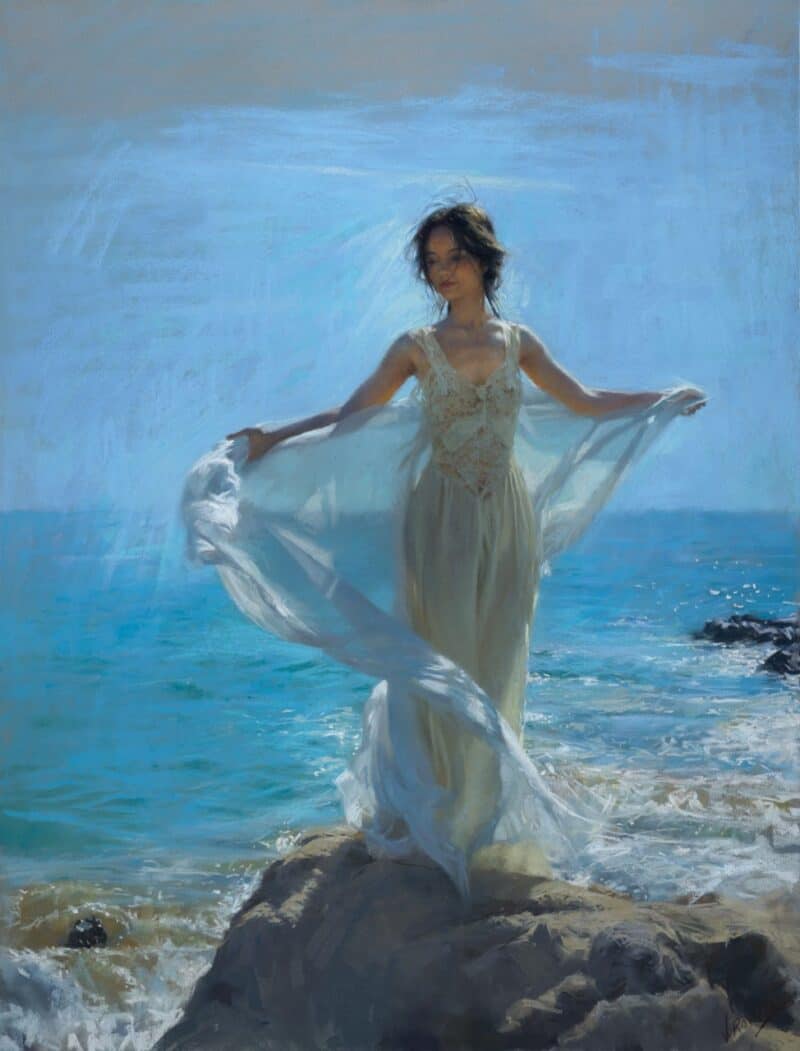 My style, as I said before, is based on the discipline of drawing. By drawing I mean a variety of aspects that include composition, the stroke applied with expressive intention and the harmony of tonal values. Regarding the spirit that animates my approach to painting, without forgetting that it may vary from one work to another, I think it can be summed up as respect for rigour and the search for expressiveness.

The motifs I have dealt with most frequently have to do with a look at the intimate world of women, something that fascinates me in a way that is difficult to explain. In general I am interested in capturing the spontaneous grace of their gestures, although I do not exclude more static poses. The atmosphere in which they are set is also an important part of this, as it determines to a large extent the feeling the work transmits. Obviously, a sunny day in the Mediterranean where I live is not the same as the semi-darkness of an interior.

In recent times, however, I have been turning my gaze progressively towards old people whose biography is marked in the geography of their faces. 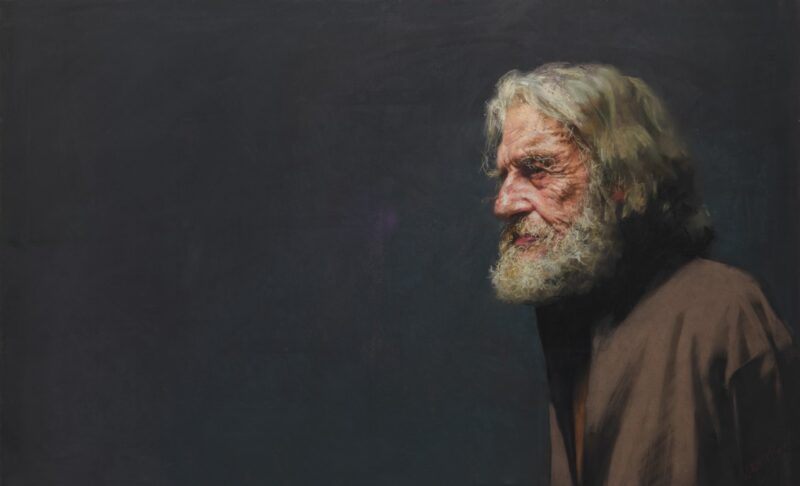 Do you have a personal favourite piece? Can you think of a piece that was particularly fun to work on?

It is difficult to answer. To be honest I have to say that I have never hung a painting of mine in my house, I don’t want to live with the dissatisfaction that my own work produces in me.

I could rescue a black and white oil painting I did about 8 years ago. It is a classical ballet dancer set in a totally symmetrical composition in the shape of an X and framed in a set of mirrors. I think I managed to express an ambiguous and mysterious sensation, based on the contradiction between the intimate solitude of the figure and the cold geometry of the environment. I believe it is the only painting in which I would not change anything.

I was also quite pleased with the portrait of a rather elderly painter friend. In this case it is done in pastel. From a technical point of view, I tried to transfer the impasto technique used by Rembrandt to pastel in some way. To do this, I first made a very precise drawing so that I could accurately place a few touches of impasto, using an abrasive acrylic gesso, in the areas I wanted to highlight. Over this preparation I executed the pastel. From the expressive point of view, the intention was that his intense gaze should be directed towards an empty space which it is not known whether it corresponds to the past or to the future. This ambiguity, as in the case of the other painting, is something that has always attracted me. 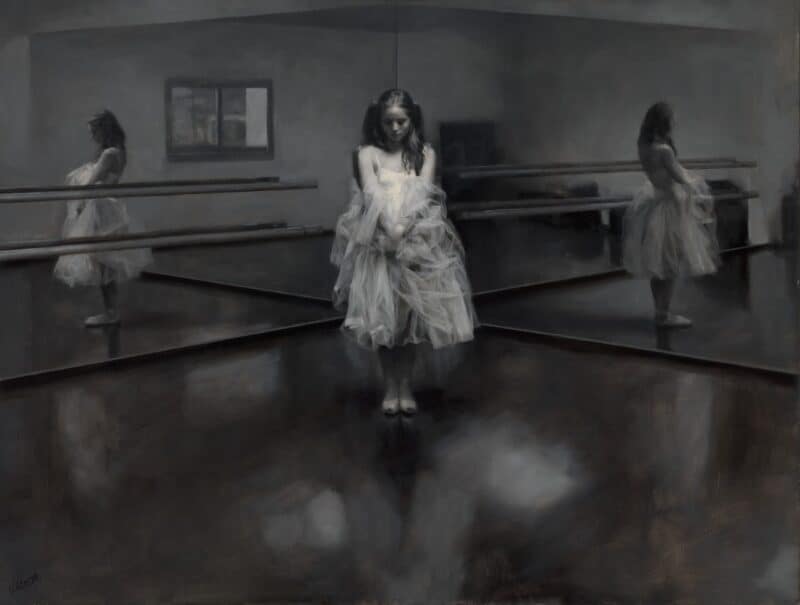 Which artist of the past would you most like to meet?

Even more difficult to answer! I would have loved to have been next to Phidias when he made the sculptures for the pediments of the Parthenon, or next to Rembrandt when he painted some of his marvellous works, such as “Vrouw Badend in een stroom”. Of course, together with Velázquez too when he conceived “Las Meninas”.

What is your favourite art gallery/museum and why?

As far as painting museums is concerned, I couldn’t say just one, there are several that are of a very equivalent level. The Prado in Madrid, the National Gallery in London, the Rijkmuseum in Amsterdam, the Louvre in Paris or the Hermitage in St. Pertersburg. I think they stand out above the rest among those I have been able to visit. The reason is that they contain pieces by the artists who impress me most, such as Caravaggio, Titian, Rubens, Van Dyck, Velázquez, Rembrandt or Vermeer… 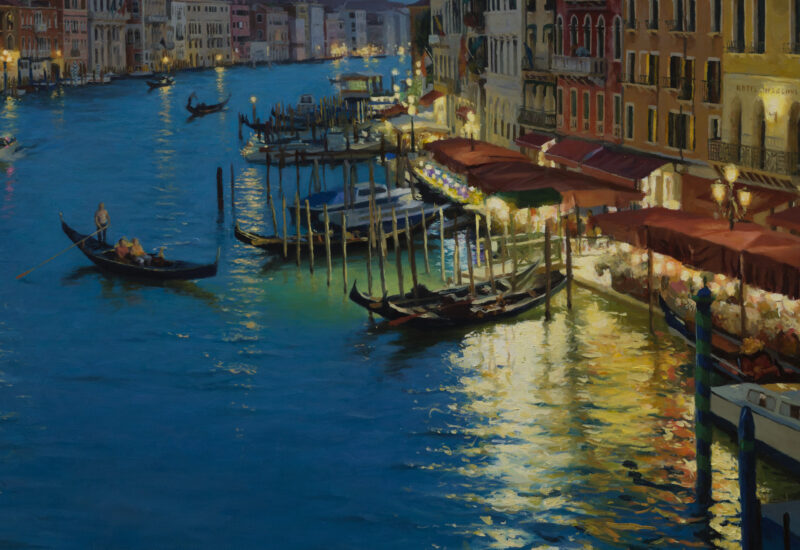 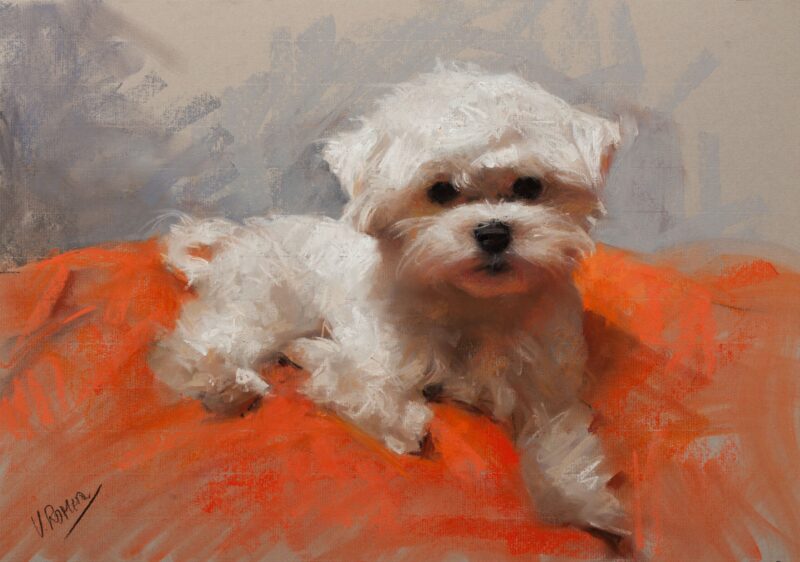 What was the last exhibition you went to?

It was at the “Chiang Kai-Shek Memory Hall” in Taipei in December 2019. I try to do few exhibitions because it is very stressful for me to have to deliver a large number of works within a certain time frame.

Which artist materials do you use and why?

When I paint in pastel, what is a technique in which the colours cannot be mixed, I use a large number of pastel sticks, about 1000, of very different brands, mainly Unison, Terry Ludwig, Sennelier, Schmincke and Girault, as well as others. I also have a wide variety of pastel pencils, from brands such as Caran d’Ache, Carb-Othello, Conté and Derwent. As a support, I generally use Canson Ingres Vidalon paper, which I glue onto thick cardboard using a hot vacuum press, so that the support has perfect dimensional stability. I then apply a very diluted layer of transparent and abrasive acrylic gesso, which allows me to improve the grip of the pastel without losing the texture of the paper.

In oil painting, however, I tend to use very few colours. In general, white, black, the three primaries, a raw umber and a yellow ochre are enough for me. But of course, depending on the work, I can use others such as Naples yellow reddish, king’s blue, carmin lake, cobalt violet, some green or Van Dyck brown. Although in my early days I used cheaper brands, over time I came to appreciate the high quality of your Old Holland colours, which I now use almost exclusively. Mainly because they are the ones with the least oily consistency and the highest pigmentation. As a support I always use Belgian linen canvases fine grain. 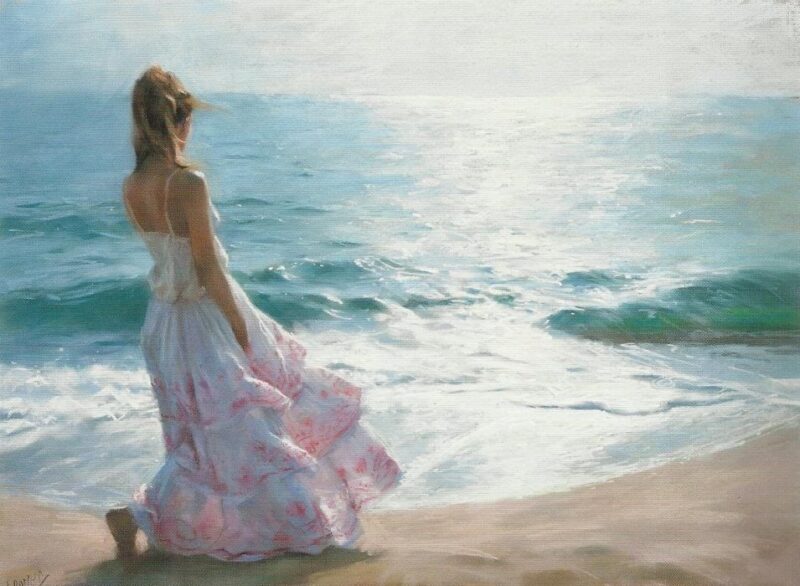 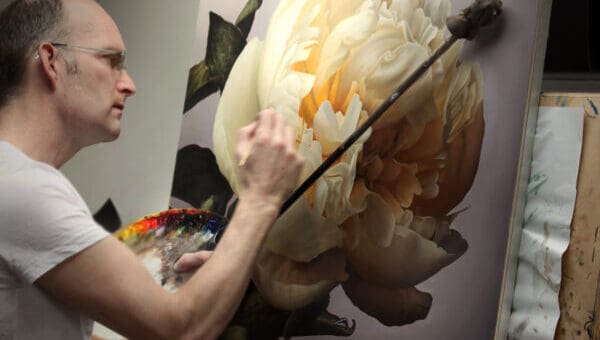 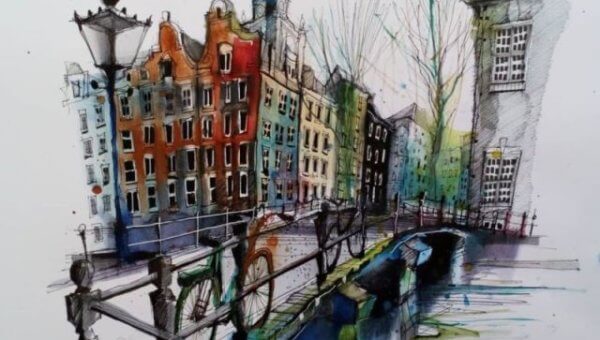 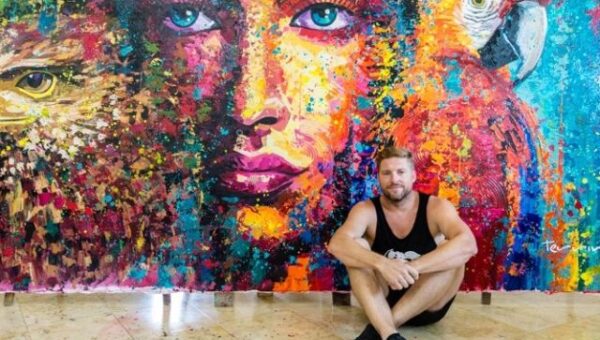